My Grandmother and Green Jeans

Like many of my wardrobe choices, this combination started with the navy leather riding boots I picked up earlier this Winter (see them styled another way here). The long navy wool jacket is actually a coat dress that I've had since the mid-90s.  It was a perfect match for the boots but, when I tried it on, I felt like the dress was a little too short for work, especially when I sat down in it.  Unwilling to give up on the navy dress/boot combo, I pulled on a pair of dark green jeans (also circa mid-90s) under the dress, threw on a matching belt, and a new outfit was born.  Before these boots, it would never have occurred to me to pair the dress with pants, but I really like the result and two items I haven't worn in forever feel brand new.

I rarely tuck my pants into tall boots, but this outfit wouldn't work otherwise.  The finished look also reminded me of this treasured photo of my Grandma Coy from the 1930s or 40s.  It's one of my favorite photos of her, looking fierce in jodhpurs, knee-high lace up boots, and a men's tie.  Like Diane Keaton in later years, Dorothy Coy could rock a menswear look but still look completely feminine at the same time.  Her ensemble seems particularly cutting edge for the time period.  Maybe she was inspired by Amelia Earheart (wearing a similar look here in 1928), in the same way that I am inspired by my Grandmother.  I wish I could have known her then!
Fashion is what you buy; Style is what you do with it! 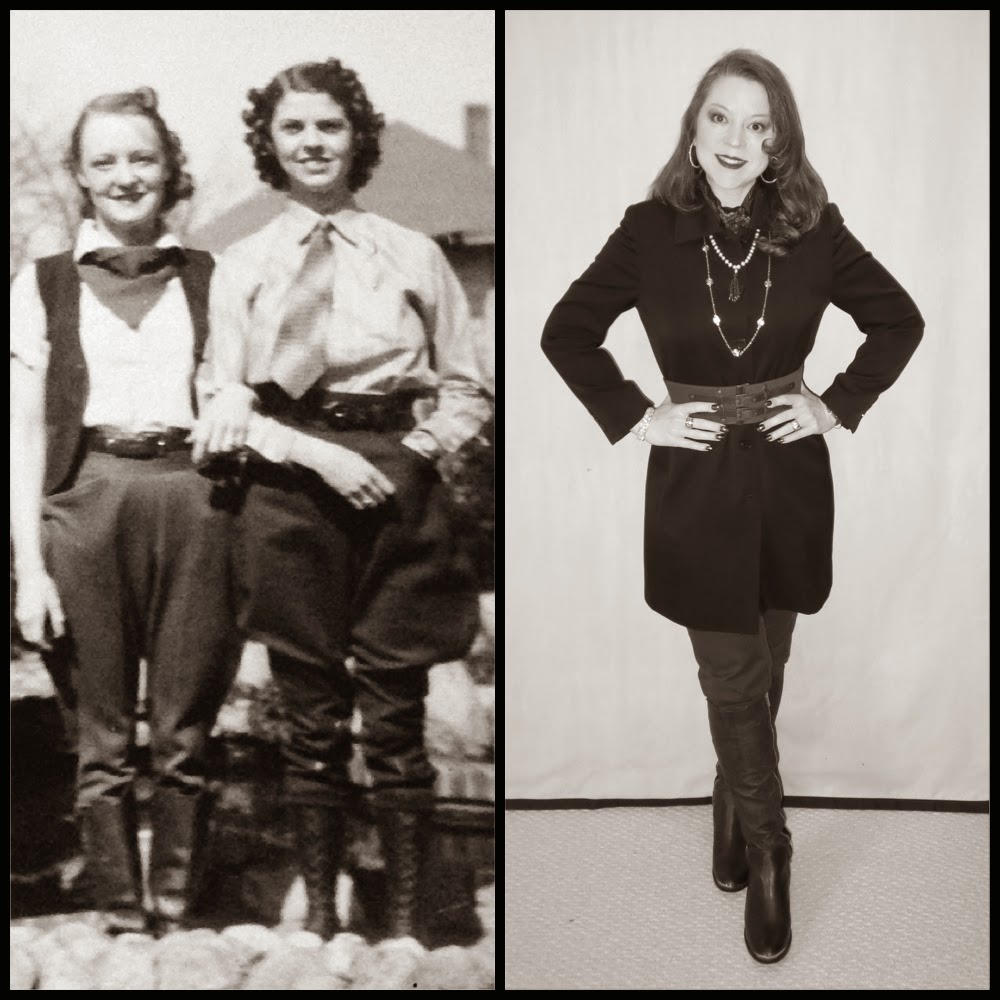 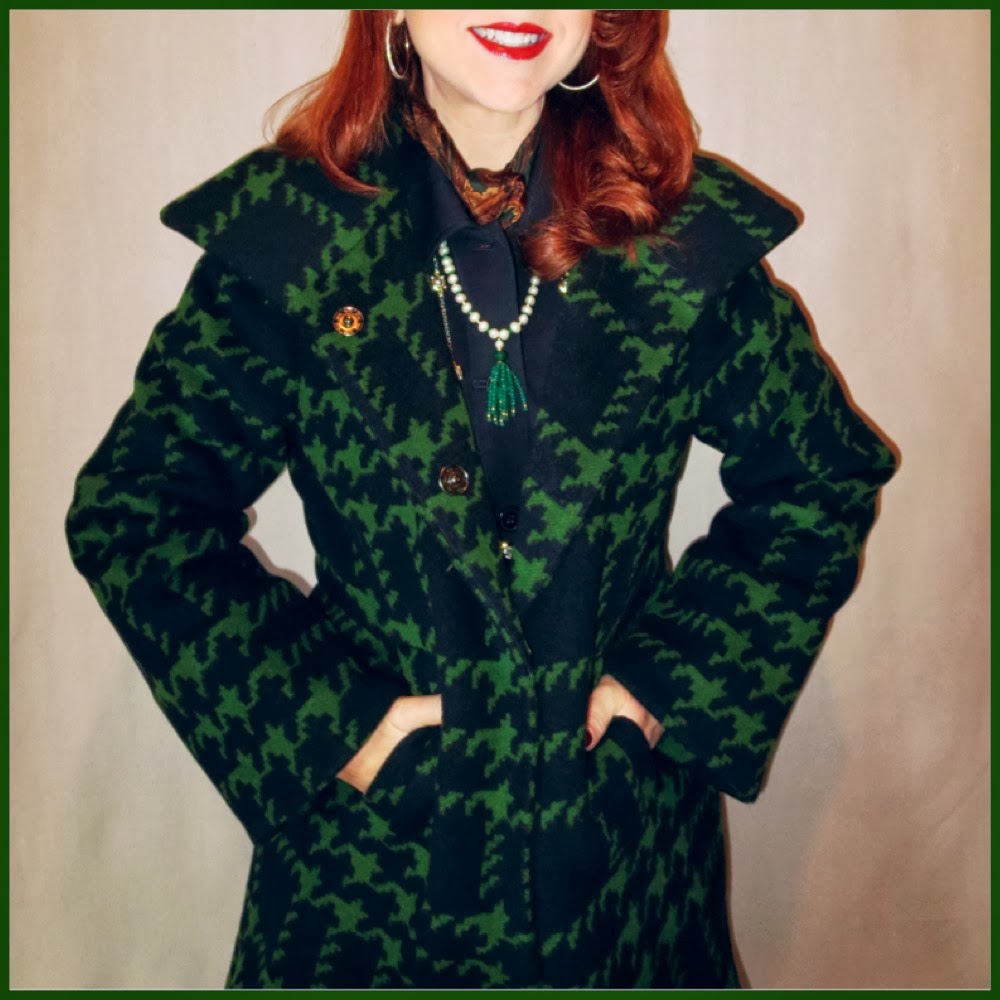 I may not have ruby red ice skates anymore (see my prior post about those beloved gems), but I do have a new pair of red boots to play with.  I haven't worn mid-calf height boots much, and I'm still figuring out how I'll style them.  Any ideas?!

This particular pair wasn't my first choice, but I like the button detail, and the price was right for a fun addition to my boot brigade (under $30!).  My first choice was a pair of crimson calf-leather Nicole Miller beauties with a stacked heel in candy stripes of red and white.  Believe me when I tell you they were phenomenal.  I'd have taken a picture, but what transpired when I tried them on had me slinking out of the shoe department in a hurry and with with a face redder than the boots.

I spotted them in Chicago during this year's Black Friday retail marathon (read about the annual madness here). They called to me from across the aisles, outlined in a soft halo of light much like Cybil Shepard's hair in old episodes of Moonlighting.  They were the perfect mix of high style and Hoosier Pride (the candy stripe heels).  Alas, they only had two pair, a size 7 and a size 10.  I'm typically a 7.5 or 8 and I had a feeling the 7 would be too snug.  But they were so perfect - everything I wanted in a red boot and didn't know I was looking for.  Maybe, just maybe, they would work.

In contrast to the vast majority of modern boots on the market these days, these particular stiff leather mid-calf beauties were without zippers, laces, elastic gores  or stretch fabric to make it easier to put them on and, more importantly (MUCH more importantly), get them off.  I should have known...I should have stopped when my feet did not slide right in.  But, they were just so pretty that my subconscious mind convinced me it must just be the stiffness of brand new leather - they'd stretch on wearing, of course.  A swift tug (with both hands) on each shaft did the trick, and there I sat in these fabulous boots, thinking how great they'd look with my red Michael Kors trench coat.

...and then I stood up.  Oh, the pain.  I knew immediately the boots would not be coming home with me because no amount of stretch was going to make them bearable.  So, after a short walk to the full-length mirror to admire their tortuous beauty, I sat down to take them off.  It took a minute for the panic to set in.  But, as I curled my toes and twisted and pulled to no avail, little beads of sweat formed on my brow.  Holy crap, I could not get them off, and pulling on them hurt!

Sheepishly, I looked around for Kevin, but he doesn't share my love of shoe shopping and was nowhere to be seen (If I had to bet, I'd say he was sitting on a bench at the front of the store checking football scores on his iPhone).  I sent him the following text:  "Need you. Now. Shoes!! Help."  And I waited, and I tugged some more, and I waited.  I tried to call him.  No answer.

About 5 minutes after my initial SOS, he sauntered over to the shoe department.  He'd assumed I just wanted his opinion ("I like the ones on the right," he usually says, without looking).  Apparently, my text did not convey the anxiety I felt as I sat helpless on a bench in the middle of the shoe department amid 25 strangers looking for Black Friday boot bargains.  He laughed, and then he pulled.  It took some serious leverage on his part to pry them off, which made me start to giggle hysterically from embarrassment. People were staring.

And then, freedom.  My toes wiggled in relief.  But that relief was quickly replaced with incredulity when Kevin straightened himself up and declared, LOUDLY, "Geez Lady, it's kind of creepy to ask a stranger to help you take your shoes off."  And then he walked away like he'd never met me before.

Fashion is what you buy; Style is what you do with it!
Posted by Unknown at 12:36 PM 3 comments:

Like most people in central Indiana this year, I've had just about enough of Winter, and particularly the record low temperatures we've experienced the past several weeks. But, there's no denying the beauty of a pristine blanket of fresh snow sparkling  in the sunlight, and what a backdrop it makes for the striking red cardinal I glimpsed out my kitchen window a few days ago.  I could complain about the bitter cold, the slick pavement, and treacherous pot holes (or "chuck holes" depending on where you're from), but I think I'll focus on the positive instead - more opportunity to embrace warm winter white wearables!

If you're going to sport one color from head to toe, winter white is where it's at.  Along with "girls in white dresses with blue satin sashes, snowflakes that stay on my nose and eyelashes, and silver white winters that melt into spring," the dressy ivory ensemble in this December post is one of my favorite things.  But, I've also embraced the near absence of color in a multitude of other outfits this season.  Different textures (eg, lace with corduroy; snakeskin with faux fur), variations in shade, and gold accents make a monochromatic look anything but plain vanilla.

I can't get enough creamy couture.  How are you wearing winter white? 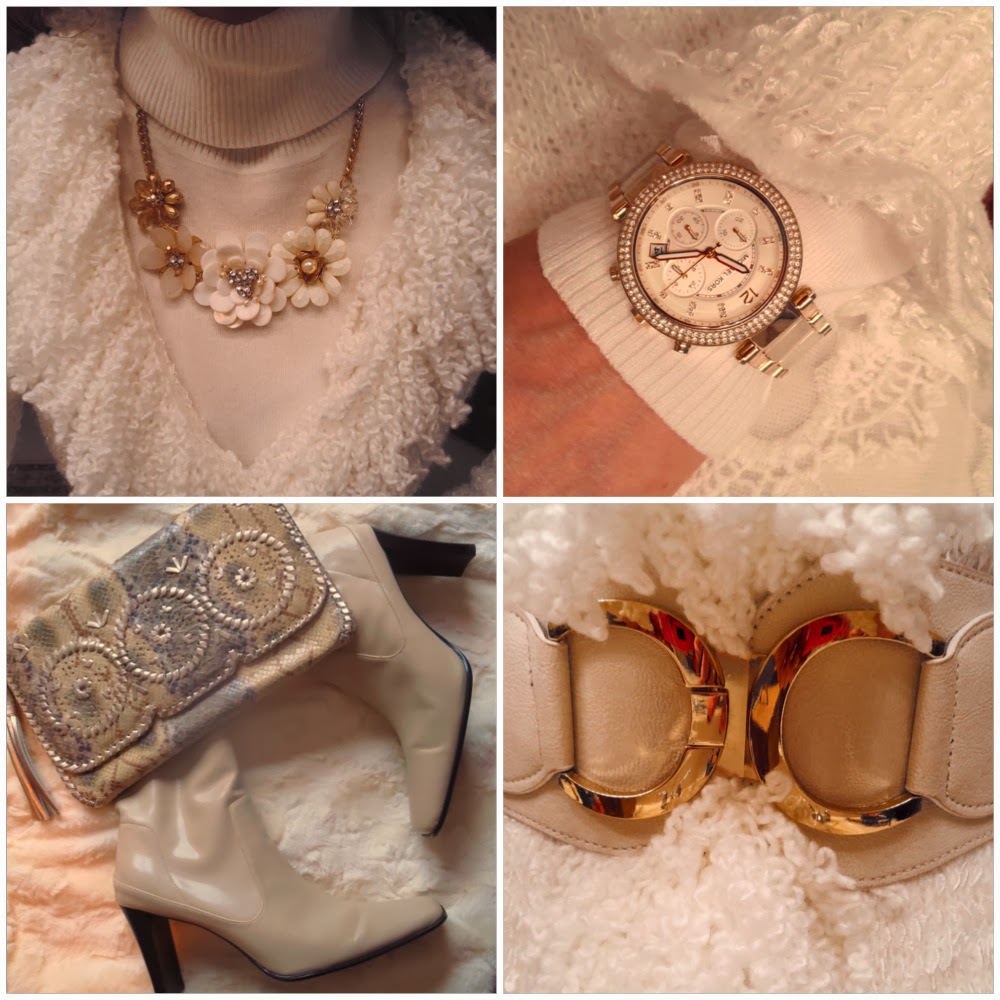 Linked up with Style Elixir and Three-fer Thursday
Posted by Unknown at 4:53 PM 2 comments:

As a "tween," I was an Olympic caliber speed skater!  Well, that is if you count the speed with which I could move across my bedroom floor in my ice skate-clad feet to hide them under the comforter when I heard my Mom coming up the stairway toward my room.  Somehow, I thought that if I pretended to read a book while posed casually on my bed under a blanket, she wouldn't notice the beads of sweat on my brow, or the tell-tale track marks in my new apricot-colored carpet.  Nor did I realize that what had brought her upstairs in the first place was the violent shaking of the dining room chandelier that hung directly below my imagined skating rink.  Reading books did not make the chandelier shake.  Double toe loops and triple sow cows did (not that I could actually do a double toe loop or a triple sow cow, but I imagined my sorry little leaps were at least as glorious as those of Rosalyn Sumners and Katarina Witt).

Despite Mom's admonitions to cut it out, I couldn't help myself, and she made more than one trip up the stairs to catch me in the middle of my free skate program.  She probably wouldn't have minded so much if I'd been practicing the "Hammil camel" in my socks.  Alas, the unprotected blades of my skates were not kind to the floor.  But those skates, oh how I loved those skates.  I simply couldn't leave them alone.  They were deep, satiny red and they made me feel tall and graceful (I was neither of these things).  I don't know where they came from (If I had to bet, I'd say she found them at a garage sale or an auction) but they were the most beautiful ice skates in the world, and in them I won every competition and starred in the Ice Capades.  A handful of times, I even got to wear them on real ice at Soupley's Pond a few miles from our house.

A few years ago, after borrowing some skates from a friend for a winter afternoon on the lake with our neighbors (photo above), I decided I really should have my own pair, since we live on the water and all.  Of course, I wanted red skates, but as it turns out, red skates are pretty much a custom deal.  So, instead, I settled for a pair of white skates with aqua details that matched my snow pants and coat.  It's probably for the best, because if I'd found red skates I'd have wanted new snow pants to match!

Speaking of matching, I've always wondered why Olympic and professional female skaters don't have skates that coordinate with their elaborate costumes.  Have you noticed they only wear white or nude skates?  Why is that?  If I were designing skating ensembles, I'd want the skates to be more dramatic.  Wouldn't it be cool if Christian Louboutin designed skates.  I'd love to see the periodic flash of red soles slicing through the air!

Fashion is what you buy; Style is what you do with it!
Posted by Unknown at 4:55 PM 2 comments:

I always refer to this sweater as the "Cookie Monster Cardigan."  Though it's teal rather than royal, the fuzzy trim reminds me of the iconic blue Sesame Street character.  I bought it primarily because it matched my teal suede boots (which I love, love, love) and I've historically styled it with the boots and black pants.  But, when I came across this gorgeous teal and chocolate printed grosgrain ribbon at Hobby Lobby, I was inspired to pair the sweater with dark brown pants and a coordinating turtleneck.  I used the ribbon (and a clip on chocolate brown wool flower) to dress up the teal wool cloche I found on clearance for nine dollars at Gordmans and, viola, a new look for the Cookie Monster.

What other colors would you pair with teal? 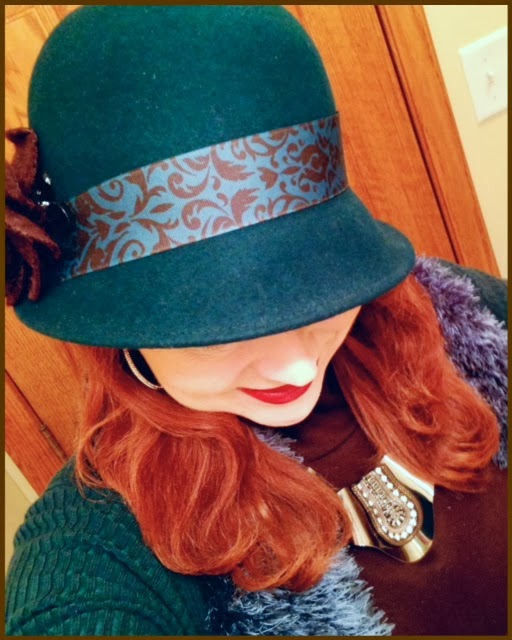 Fashion is what you buy; Style is what you do with it!
Posted by Unknown at 4:56 PM 4 comments: