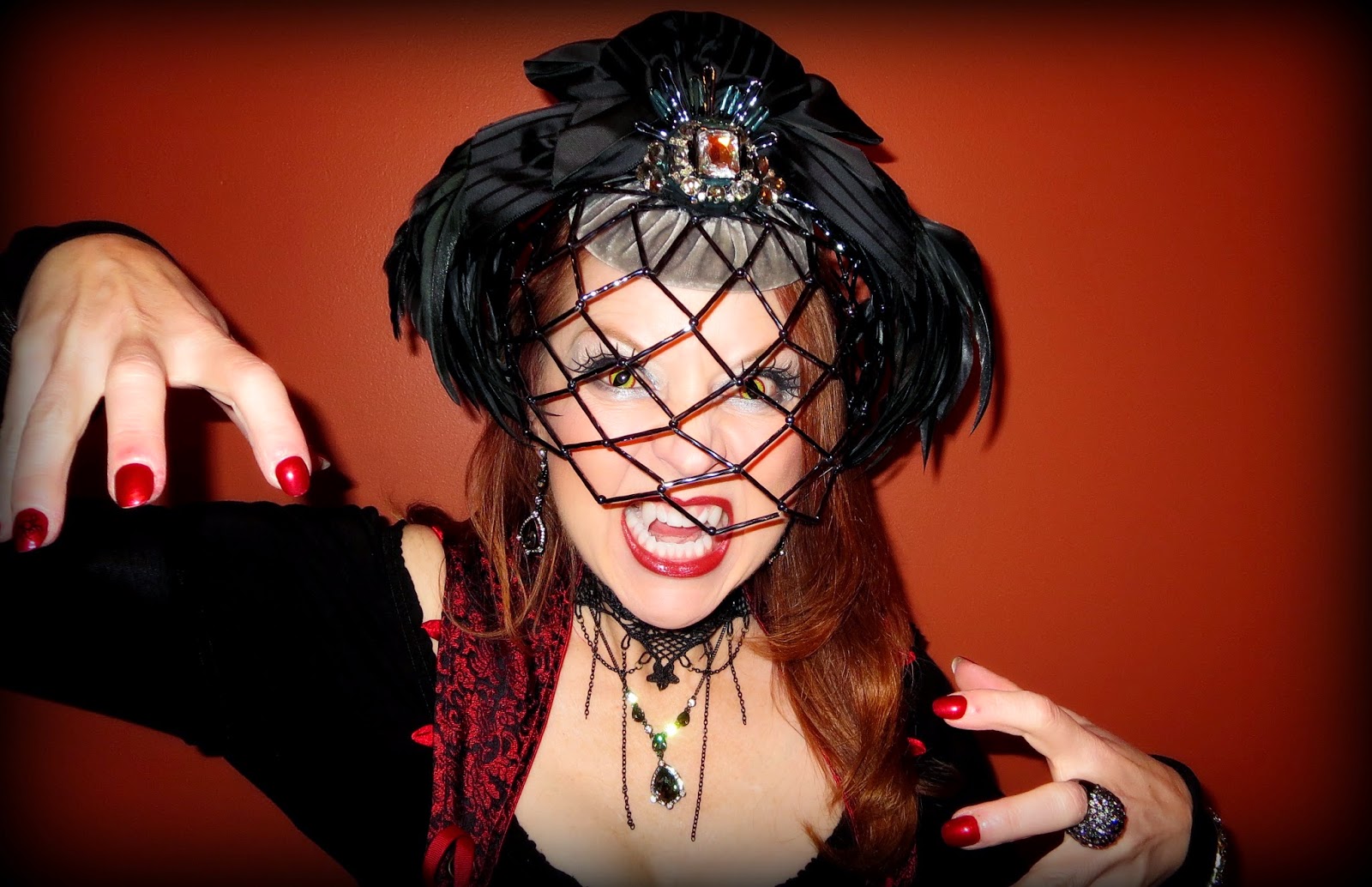 Have you ever noticed that vampires in old movies make an evil hissing sound every time they talk? I'm not talking about the Cullens in all their sparkly skinned glory, but old-school Count Dracula types who can be repelled by garlic, killed with a stake through the heart, and just "vant to suck your blood."
Well, last weekend I found out why that is...It has nothing to do with sounding spookier, and everything to do with the fangs. As it turns out, when you have fangs, you can't close your mouth all the way and saliva tends to pool up (kind of like sitting in the dentist's chair with your mouth open). So when you start to speak, you have to sort of suck up the saliva to avoid drooling. It makes an evil hissing sound. Kind of gross, I know, but there you have it.
Even so, wearing the prosthetic canines did make me feel spooky, and I felt compelled to make scary faces all night (or at least what I hope were scary faces). I was also really impressed with how realistic those suckers looked and how well they stayed in. After a bit of online research, I ended up using these fangs because they were smaller and had a more realistic shape, but I used the molding kit from this set to customize the fit because it seemed easier to use and had better reviews. Molding them to my own teeth took less than 15 minutes and was far less disgusting than I anticipated. I was able to slip them in and out with ease throughout the evening to eat and drink (because accidentally swallowing, and then passing, a nylon fang would not be a pleasant experience), but they never fell off when I didn't want them to. 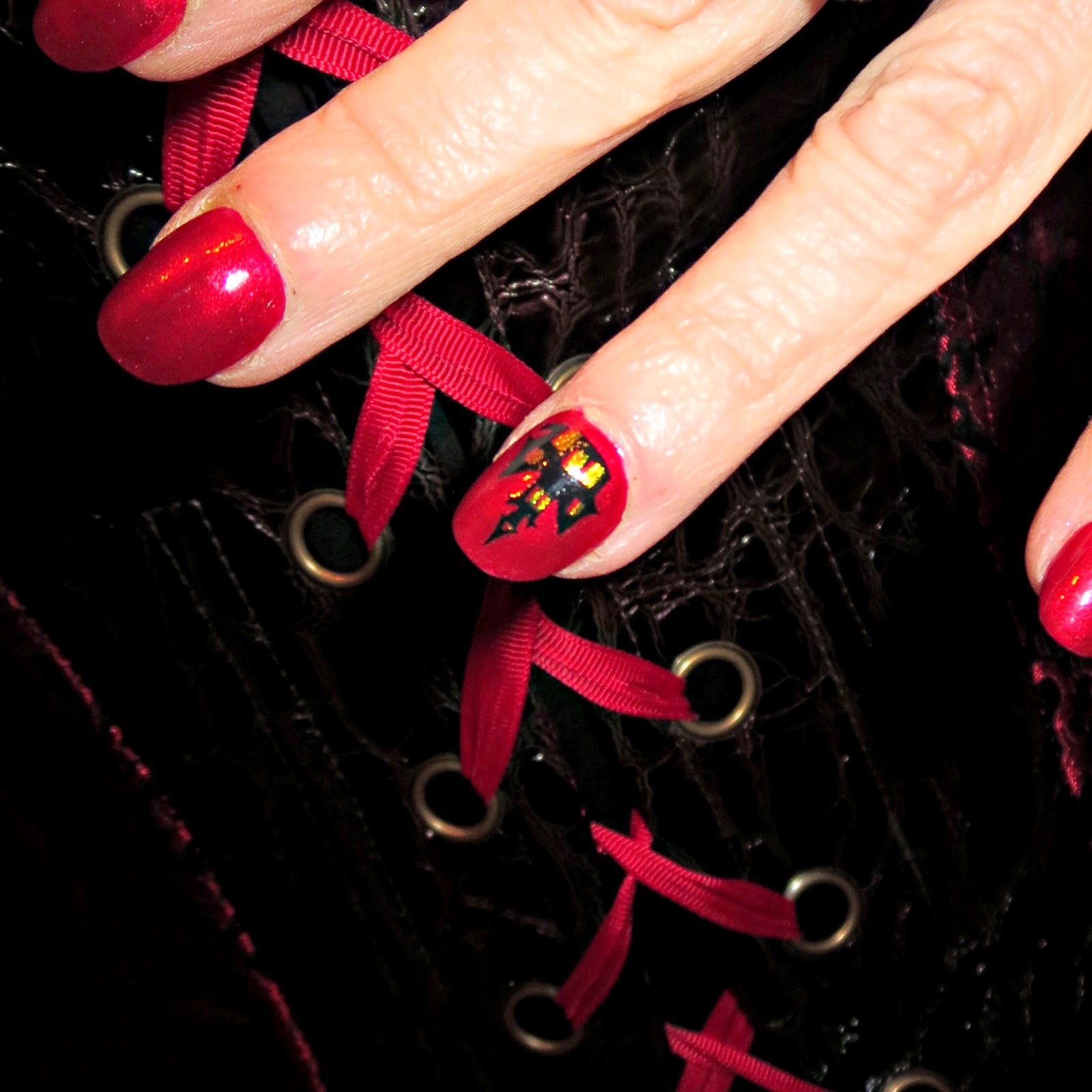 Beyond the obvious desire to avoid swallowing and pooping out a fang, I also removed them to eat because the online reviews warned that dark colored foods and beverages would stain them (I guess movie vamps must need a new set every time they bite a victim). The alternative would have been to not eat, and since the evening's main event was a chili cook-off, that certainly was NOT an option! 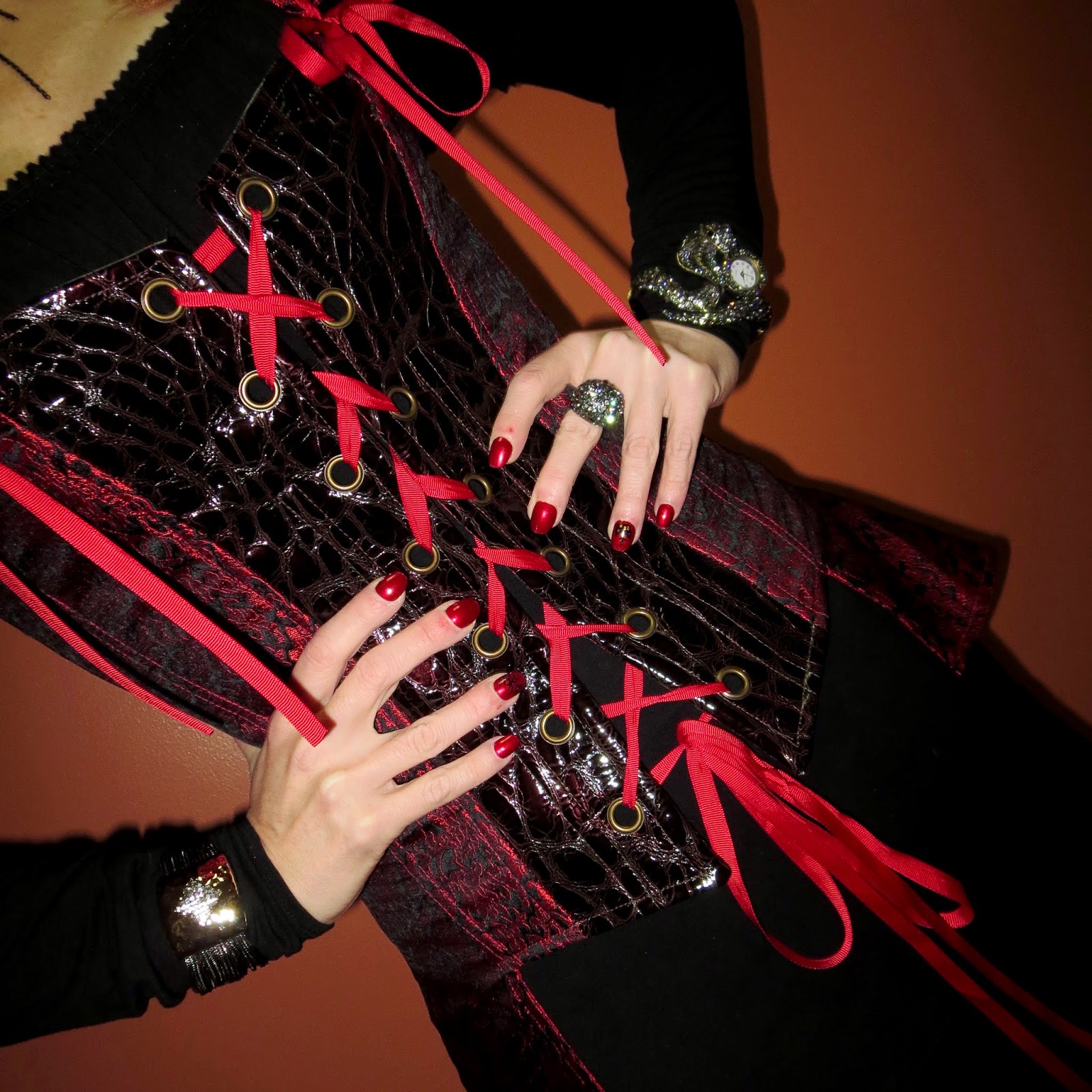 I wanted my own chili entry to coordinate with my costume, so I decided it needed to include a healthy dose of fresh garlic and that I'd call it "Vampire Killer Chili." In a stroke of genius, KDef suggested that I also use steak tips in it, as in killing vampires with a "stake." You know I'm a (blood)sucker for a good pun, and 15 minutes later I'd created the description below.
The recipe itself, which I share below, was actually the last detail I nailed down, and I tweaked it as I cooked right up until it was time to leave for the party. The presentation, however, was a no-brainer. I found this coffin guitar case on eBay a number of years ago, and it's been the perfect serving platform for a multitude of delicious but deadly-looking dishes over the years. It's also remarkably travel friendly - everything other than the blood red crockpot full of chili itself fit easily inside the closed case.

Some may view display as as afterthought, less important than the actual food, but it's creating the aesthetic that really gets my juices flowing. Lest you think I'm overstating my focus on the visual, I'll sheepishly admit that in 2009, I was sorely disappointed when my sombrero and cactus-accented Mexican serape-draped table received second place for "presentation" in a neighborhood chili cook-off, even though my southwest chili recipe itself took home first prize! 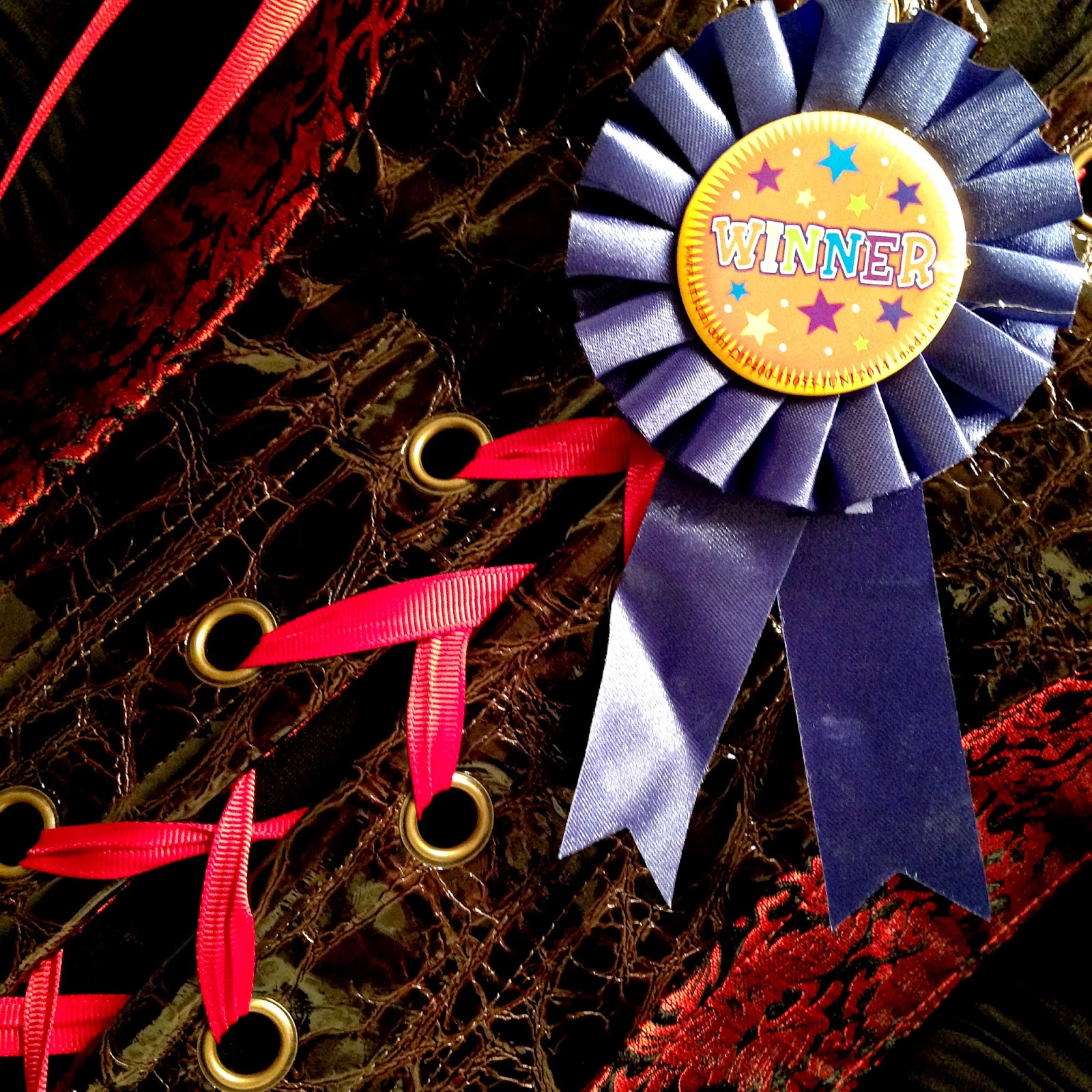 This year, I put a lot of effort into developing my Vampire Killer Chili recipe (and marinated the meat and vegetables for 12 hours prior to cooking), so I had high hopes for another victory. Well, it was a huge hit and there were no leftovers at the end of the night, but when the votes were tallied I didn't come up the winner (that's ok - I voted for the chili that actually won, too!) But, our dear host did give me a ribbon for the "killer" display, which warmed the cockles of my undead heart and put a huge grin on my drooling, be-fanged face! 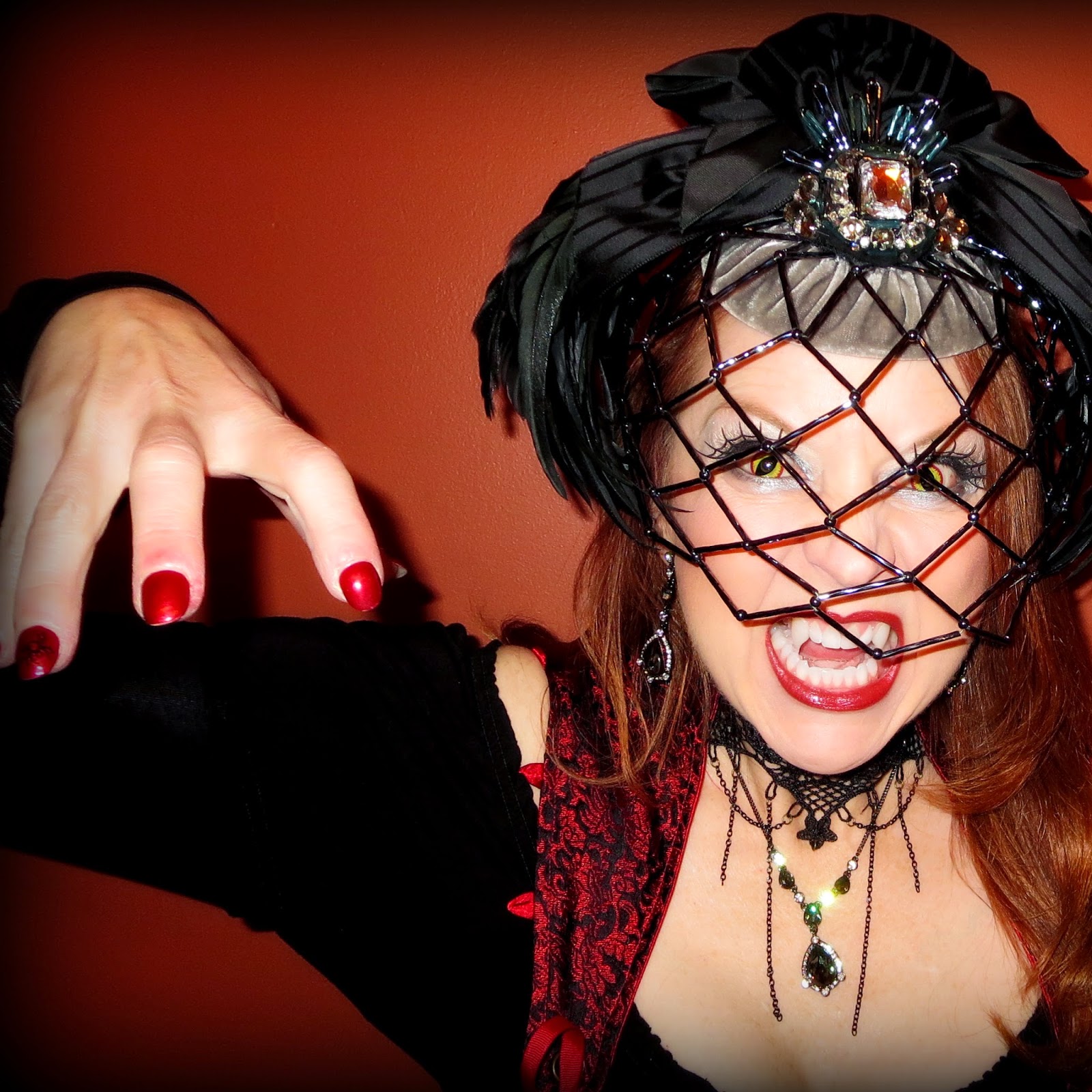 If you want to feed a crowd and kill off some vamps at the same time with a pot of hearty chili, you'll need:
The night before cooking the chili, combine the chopped peppers, onion, garlic, sausage (broken up into pieces), and steak in a large container. Add to this a few large pinches of salt and pepper, and approx. 4 to 5 TB of Worcestershire, and 2 to 3 TB of liquid smoke. Mix thoroughly (I put on sterile gloves and used my hands). You want to be sure everything is completely covered and that the mixture is very wet, but not soupy. You can adjust the liquids accordingly. Cover and refrigerate overnight to let the flavors really marinate and meld.
After the mixture has marinated for several hours, brown it in a large skillet (or two). I used two skillets and it took about 10 minutes on medium-high heat. To this mixture I also crumbled up and added a few strips of crispy bacon (that just happend to be left over from breakfast. Not essential, but a tasty addition). Don't drain the meat after you're done browning it. Add the entire mixture, liquid and all, to the crockpot.
Next, add the chili beans, tomatoes, and tomato paste to the crockpot. I only added about half of the tomatoes to start with, until I had the consistency I wanted. I added more after the chili had simmered for a few hours and cooked down. I like chili on the thick and chunky side, but you can adjust to whatever consistency you prefer. Once all of the these ingredients are in the crockpot, add the chili powder, coriander, cayenne pepper and cumin. I also threw a few garlic cloves in for good measure. This is the least precise part of the recipe, and is truly a matter of personal taste. I'd suggest using a light hand to start, and add more periodically as needed while the pot simmers.
After about two hours, add two cups of cooked rotini pasta to the pot and mix thoroughly (you'll likely also need to add more tomatoes at this point, and more spices). You could also add uncooked pasta to the pot from the beginning, and it will cook as the soup simmers. That's what I do with my traditional chili recipe, but sometimes the pasta ends up pretty mushy, so this time I cooked it separately and added it later. In total, you'll want to allow the pot to simmer on low for 4 to 6 hours. Enjoy! 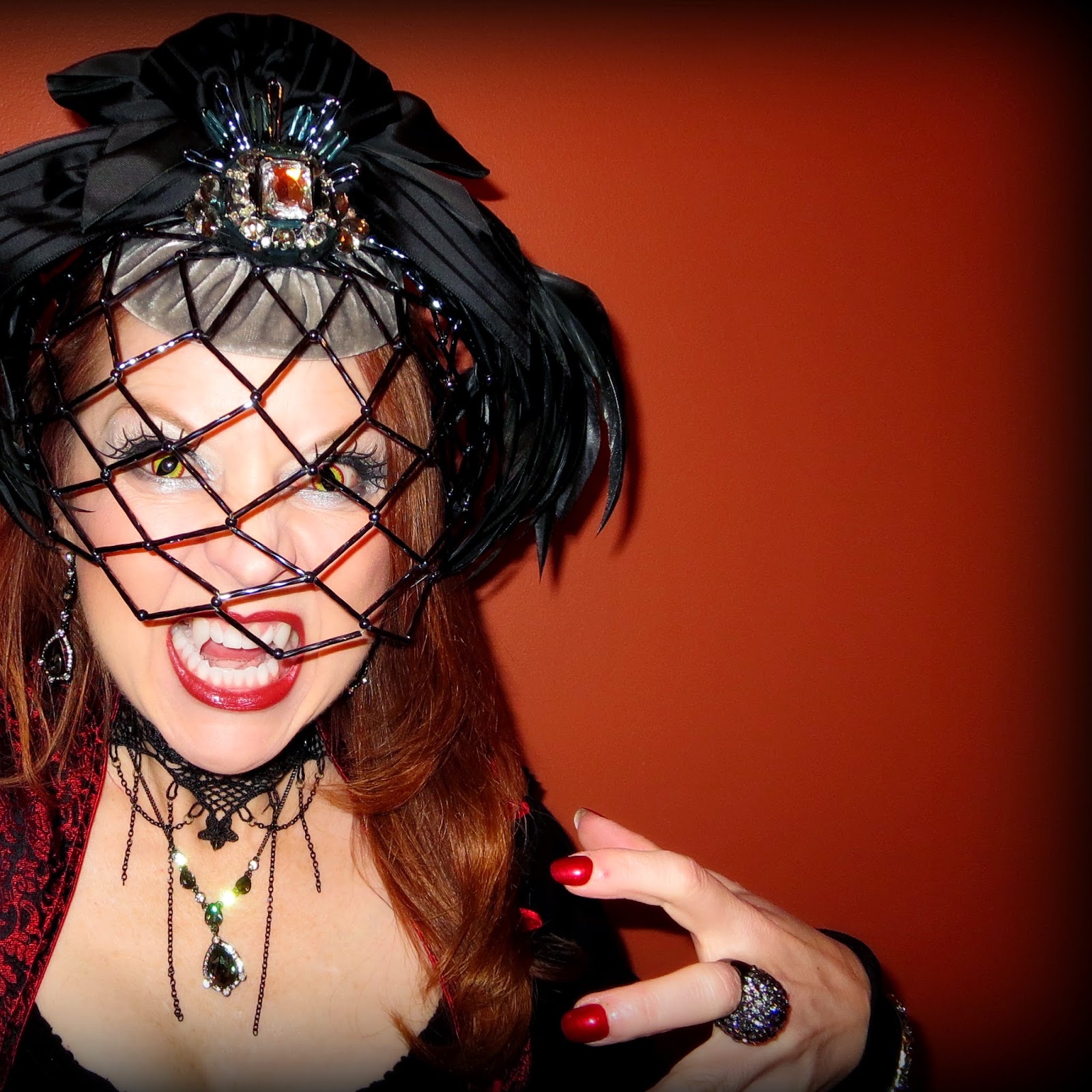 You can also check out other fun hats at Style Crone's Hat Attack.
You may also like: 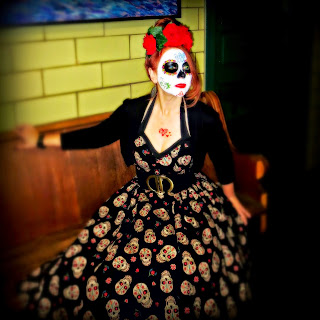