I love it when a plan comes together...

In the infamous words of Hannibal Smith, "I love it when a plan comes together." Some fourteen years ago when Dress for Success Indianapolis (DFSI) was in its infancy, I hatched a hairbrained idea for a fashion show to raise funds to support the ongoing work of this organization that helps women in Central Indiana achieve self-sufficiency. "Let's get prominent and successful local women engaged in the mission by asking them to participate as 'runway role models' for our clients," I said to my fellow board members. "Let's feature locally owned boutiques and get some firemen to help us collect money," I enthused. When I get an idea, I tend to obsess about it in infinite detail....
As excited as I was about the idea, I can't say the same for all of my colleagues on the board and the fundraising committee. In fact, a couple of them were quite vocally opposed and thought it would never get "off the runway" so to speak. No one would ever say I give up easily, though, and with the support of founding Board Member Tandy Shuck as my co-chair, we formed a committee and gave it our all. Our first time out, the goal was to raise awareness of the organization and its mission without losing money on the endeavor. After more than a year of planning, we pulled off the very first Stepping Out In Style, an event for 330 guests that netted around $7000. It was enough to sway the skeptics, and in year two, we doubled attendance and increased our net profit to $50,000! Working on Stepping Out In Style in those early years took more blood, sweat, and tears than I ever anticipated, but never have I been more proud of delivering on an idea.

It's been quite a few years since I chaired the event, though I'll always be a staunch supporter. I've delighted in watching it grow into a hotly anticipated annual extravaganza for nearly 1000 guests that raises more than $200,000 each year. It's also been exciting to see the brilliant new ideas that the event chairs and volunteers cook up each year to keep the evening fresh and evolving.
If you've been to Stepping Out In Style, you already know how much fun it is. But as much as I love a good party (with firemen), that's not what makes it a great event. Stepping out in Style is a great event because of the two beautiful women pictured below. Gwendolyn and Jewel are both lifetime members of DFSI's Professional Women's Group (PWG). Gwendolyn and Jewel and 11,000 other women that have received services from DFSI are the reason Stepping Out In Style exists.  Gwendoln and Jewel and every women DFSI will be able to serve because of the money raised by the event are the reason it matters. Gwendolyn and Jewel and the community that has been enriched by their success are the reason the event is great.

Let me introduce you to Gwendolyn and Jewel. Gwendolyn is married with two sons. She works at Indianapolis Public Schools as a Parent Involvement Educator and is currently working on a certificate in health care support with a concentration in medical office administration. Recently, Gwendolyn was honored as one of only ten PWG participants across all of the Dress for Success affiliates in the country to receive a competitive scholarship to continue her education! Gwendolyn was so committed to the PWG program that she graduated to Lifetime status in just six months, and she’s a current participant in the Personal Financial Literacy program. Outside of work, she has a passion for community service, spending time at local hospitals, being involved with Big Brothers and Big Sisters, mentoring pregnant teens, and assisting the elderly with their personal errands. To top it off, she's also going to lead a PWG Community Action Project this year!


After experiencing discrimination for her appearance during job interviews, Jewel was introduced to DFSI through community resources. She was able to find employment using the services offered through the DFSI Career Development Center, and she’s now an office assis­tant with accessABILITY Center for Independent Living, Inc., an organization that helps give people with disabilities the support they need to ensure full inclusion in community life. She now uses the Professional Women’s Group for ongoing support and career development guidance as she continues with her success in the workplace. And speaking of success, Jewel was just named employee of the month and received a promotion!
This year, I was honored to walk the runway with Gwendolyn and Jewel, and to break bread with them backstage. These women inspire me. They also inspire the myriad of sponsors who help make Stepping Out In Style the successful fundraiser that it is (check them out here). I hope Gwendoyn and Jewel inspire you, too! 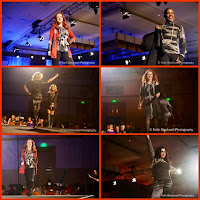