Off With His Head!

I'm like a kid when it comes to Halloween, so I was a probably unreasonably giddy when our Halloween chili cook-off hosts gave me the prize for best costume Saturday night. 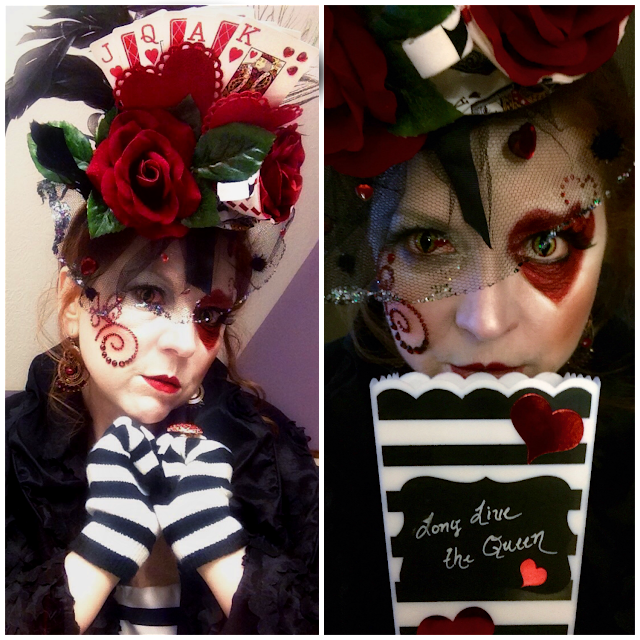 Strangely enough, inspiration for the Queen of Hearts theme struck less than a week before the party. Being my OCD, theme-loving self, my chili cook-off entry had to coordinate with my costume (it wasn't a requirement for the cook-off, just a Jody requirement... come on, you're not surprised). 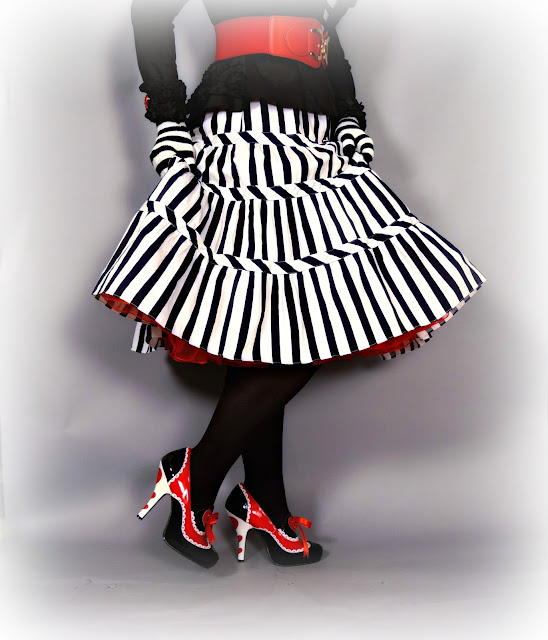 The best chili I've had in a minute is a white chicken chili recipe that my friend Jen makes. It's actually really healthy, and it's dairy and gluten free, so using her recipe for the cook-off also meant I'd actually be able to eat my own entry without paying for it later. 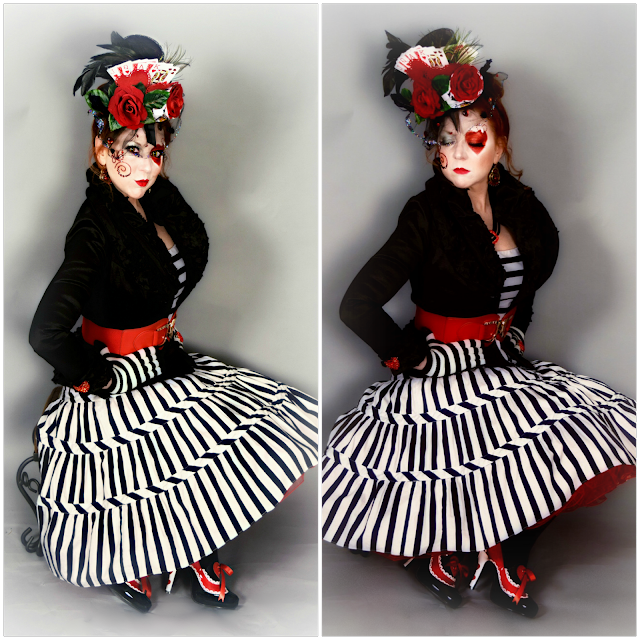 As soon as I settled on the chili recipe, a light bulb went off: I'd go as the Queen of Hearts and turn the recipe into  "White Rabbit Chili" (he shouldn't have been late, after all...) I've hosted a couple of Mad Hatter tea parties in the last few years, so I already had everything I needed to set up a Wonderland-worthy chili buffet station, and I knew I could pull the costume together using items already in my wardrobe. 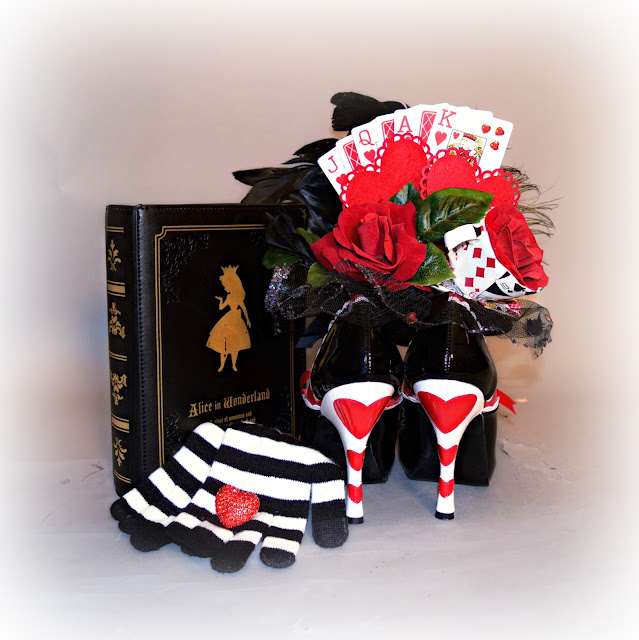 I already had spectators with red hearts on the heels and an Alice in Wonderland storybook-shaped clutch, which I paired with a black and white striped sundress I found on eBay last Summer. The Queen is usually portrayed with a large stand-up collar, so I topped the dress with a black shantung peplum jacket with a wire-edged ruffled double collar that allows it to be molded into various neckline looks. The jacket was a clearance find from Pretty Woman, a little boutique in Bedford, Indiana, that I picked up a few years ago. I love both pieces, but I never expected to wear them as part of a Halloween costume, or to wear them together! An old pair of striped gloves, a heart shaped stretch ring, and some inexpensive heart shaped brooches fashioned into cufflinks and a necklace (the only new items I purchased) completed the look. 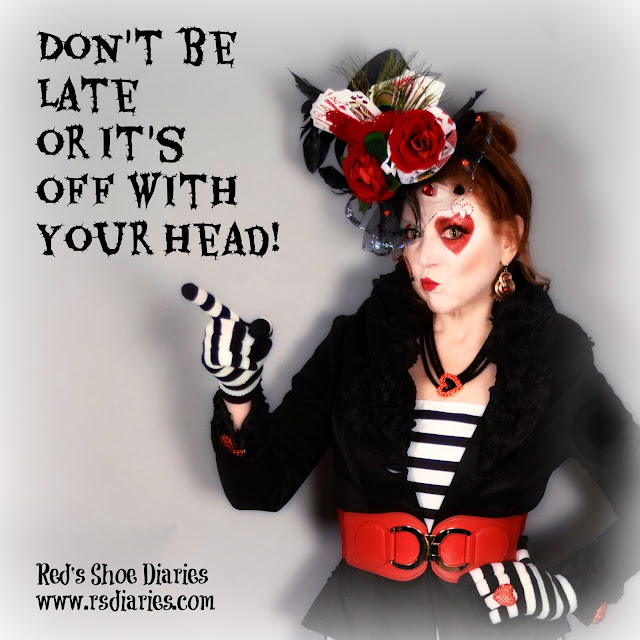 I didn't have a crown, so I repurposed a little black top hat using a deck of cards; a small fabric teacup in a card pattern; some red velvet roses I pulled out of a Christmas arrangement; feathers left over from another project; and a few stick on heart-shaped gems. As for makeup, I didn't want to do the blue-eyeshadowed Disney look. I ultimately decided to paint a heart around one eye rather than turn my mouth into a heart, so that I could eat and drink without wondering whether my heart was breaking. I also used three-dimensional red scrapbook gems, affixed to my cheek and forehead with eyelash glue, to add a little sparkle, and covered my face with iridescent white eyeshadow to give the red accents more dramatic impact. I had the most fun setting up the details for the chili buffet. I made a sign using clip art; labeled shredded mozzarella as "Rabbit Dropping Topping"; and made "tea" using rabbit's feet that I made using strips of white faux fur and hot glue. A small alarm clock from a guest bedroom served as the White Rabbit's pocket watch. I even used cookie-cutters to cut little hearts out of corn tortillas, which I then sprayed lightly with cooking spray, dusted with garlic, and baked until they were crispy - a Wonderland alternative to traditional crackers in your chili. Over the top? Not in my world. Down the rabbit hole? Absolutely! 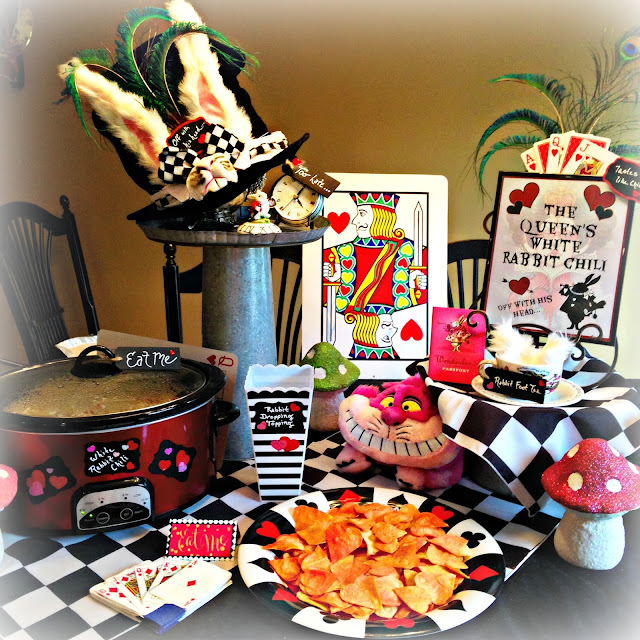 Fashion is what you buy; Style is what you do with it!
You can get the details from last year's Vampire Killer Chili here. 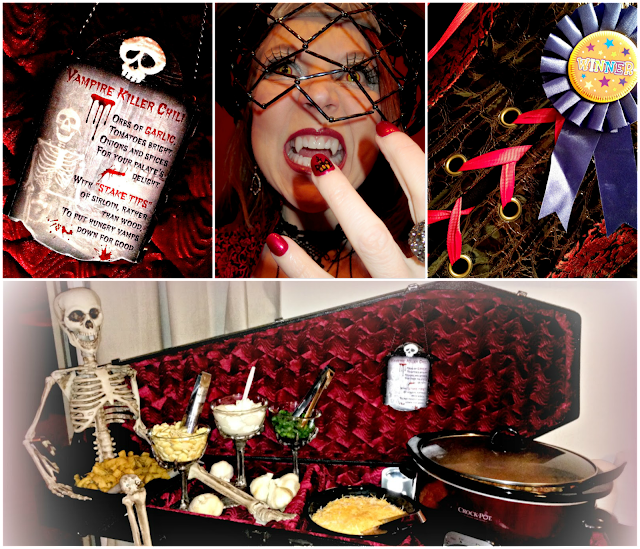 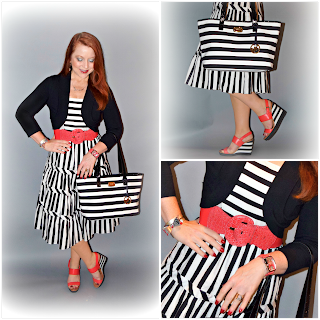 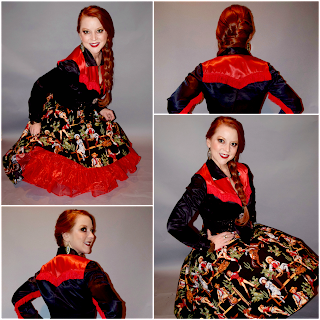 I'm also linked up with The Style Crone's Hat Attack this month!
Posted by Unknown at 11:31 AM