"Who is your classic movie star doppleganger?" I typically ignore the countless "quiz apps" that periodically float around on social media, but given my love of "Old Hollywood" style, this one piqued my curiosity. I was surprised at the result, though it's obviously based solely on some reasonably clever algorithm that identifies certain similarities in social media pictures of the subject and archived photographs of a small library of historical figures. 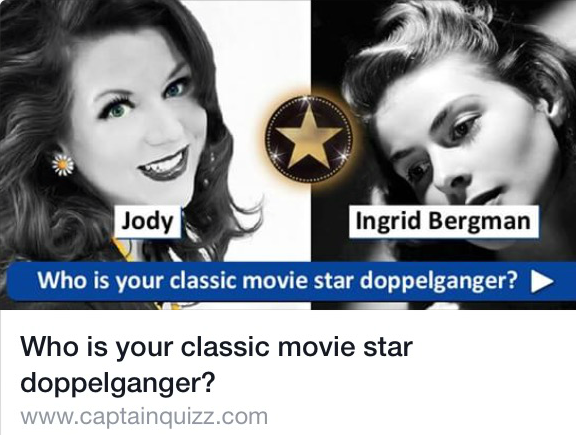 I can see why a non-human app would select this particular photograph of Ingrid Bergman to compare to my black and white headshot, but I don't actually bear much resemblance to the 1940s star most most well-known for her role opposite Humphrey Bogart in Casablanca.
That said, I do admire her style. And coincidentally enough, just a few days prior to taking the "doppleganger quiz," I sported my own, updated version of a classic 1940s look similar in details to some of Ms. Bergman's classic wardrobe pieces. The jumpsuit was first popularized in the World War II era (a la Rosie the Riveter), and this one by Swedish line Miss Candyfloss deliberately echoes the past in its tulip sleeves, V neckline, bust darts, and voluminous legs. In fact, it looks as though it might have been modified directly from this vintage 1940s pattern.
I have other jumpsuits, and I like the style because it's effortless and comfortable. But I have to say this one wins high marks in particular for the fact that it fastens in the front. My first foray into jumpsuit territory a couple of years ago had more of a 1970s Charlie's Angels vibe, and while I love how it looks, I don't wear it often because the rear zipper is very inconvenient given the volume of Diet Coke I consume on a daily basis, if you know what I mean...
Fashion is what you buy; Style is what you do with it!
I'm linked up with Hat Attack!
You may also enjoy these posts: