Last Friday, we went to the Butler Ballet's production of The Nutcracker.  I've long loved the music (and even had some of Tchaikovsky's score played at our wedding), but I had never seen a live production.  It was mesmerizing.  Though Dance of the Sugarplum Fairy remains my favorite piece of music, I have to say that The Kingdom of Snow was my favorite set, and I loved the icy blue costumes of the Snowflakes and the Snow Queen.  I had reason to pay close attention to these details, because I'm in the midst of planning a Nutcracker themed birthday party for a friend's soon to be nine year old daughter.  Seeing the ballet this year was a must to provide ideas for the party theme and decor!  I was definitely inspired, and have had visions of sugarplum fairies dancing in my head ever since.

My own ensemble for the evening was a bit of a tough nut to crack.  I picked up this creamy winter white faux fur jacket in 2011.  It was marked down 75% at a now defunct little boutique because it was out of season and missing one of the decorative buttons on the shoulder.  The missing button was fine with me, because the remaining buttons were plastic, and I wanted to replace them with something a bit more elegant anyway.

I thought that replacing the buttons would be a snap, and I envisioned marcasite and pearl brooches as the perfect compliment to the vintage looking garment.  As it turns out, finding acceptable replacements has been a two year quest.  I finally chose these crystal snowflake brooches two weeks ago while shopping with a friend in Chicago.  They aren't the vintage marcasite pieces I envisioned, but they seemed appropriate for The Nutcracker on a cold and snowy December night.

With its new crystal snowflake "buttons," the jacket was finally able to make its debut with this embroidered dress that I've also had for a few years.  The fabric of the dress is quite heavy, and it has always seemed "wintry" to me despite its spaghetti straps and sundress shape.  A vintage jet beaded necklace (handmade and worn by my grandmother decades ago), and knee-high boots (Mother Nature dumped 4 inches of snow on us the day of the ballet) completed the look.

I also found a second set of brooches on the Chicago trip, which I used to change up the look of the jacket for an office holiday party Saturday night (see it here).  It was fun to wear two days in a row after it had languished in my closet unworn and missing a button for so long.  But, I'm still on the look-out for the vintage marcasite pieces in my mind's eye.... 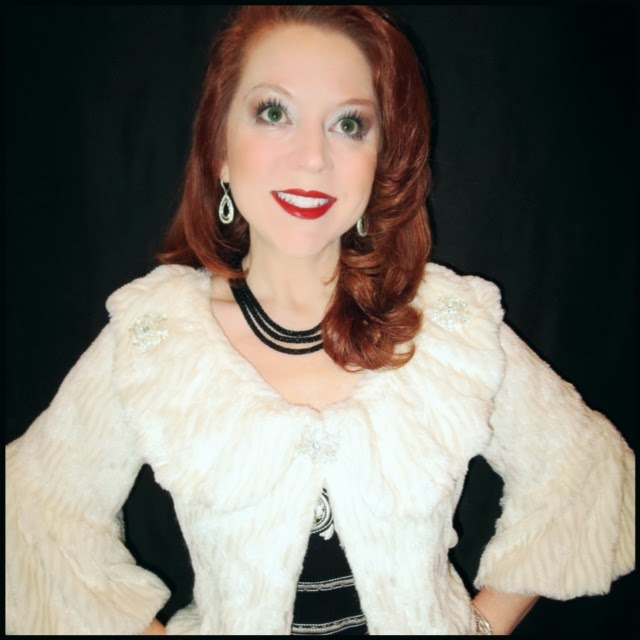